Decorating With Chinese Antique Living Room Furniture
A pair of red and green Chinese wedding cabinets found in Belgium fit perfectly into Lina Kanafani's living room alcoves. ¡°Their colours are a source of warmth and add playfulness to the general ambience of the room,¡± she explains. In practical terms, they are used to store the music system, speakers, CDs, books and magazines. For Kanafani, aesthetics is more important than value: ¡°They may not be ¡®important' pieces as far as Chinese furniture is concerned, but they have perfectly achieved the effect I was after.¡±

In a corner of the living room is a Japanese screen which dates from the late 16 th century and depicts the Imperial horse stables. The carpet is late 17 th century Chinese and the pair of Huanghuali horseshoe back chairs are part of a set of four 17 th century pieces. 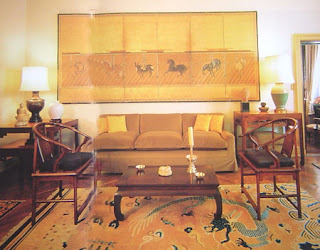 Clean lines, lack of ornamentation and a subtle colour scheme characterize Kai-Yin Lo's living room, where Chinese art is hung on the walls with architectural precsion. A pair of window panels features the persimmon in a four-petal design. ¡°One of the earliest plant motifs used in China, the persimmon dates more than 1,800 years to the Han dynasty,¡± she says. On a Ming side table at the back of the room is a pot filled with 200-year-old fungus called Lingzhi found in Anhui province. 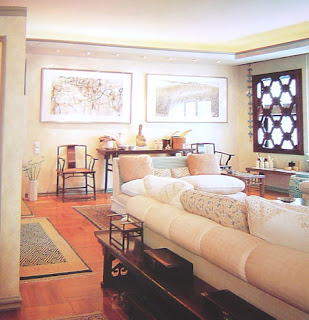 A pair of sofas dressed in pale textured fabrics stand in the center of Kai-Yin Lo's living room, defining the seating area in the flowing, open plan space. Recessed and spot lighting illuminate her extensive collection of Chinese art and furniture. A low platform functions as a coffee table; it was originally one of the earliest types of raised seating in China. This rare piece dates from the 18 th century and is made of nan mu (a variety of cedarwood). It is constructed of three modular sections which can function as a single platform (pictured here), or used separately as smaller seats, stands or low tables. On top is a miniature Ming display table featuring a collection of Buddhist knots of destiny. A silk padded screen, featuring artworks in ink and colour, shields the dining room from the living area. A 3 rd -century Gandhara Buddha from the Indus Valley stands serenely in the entrance hall. 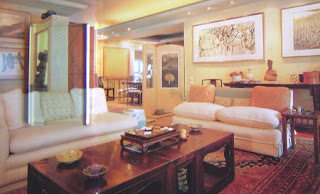 ¡°Rocks are treasured by Chinese collectors as objects of art,¡± explains Wu. ¡°They symbolize nature and can be brought inside so one can contemplate nature indoors.¡± This malachite stone from Shilu Mountain is an impressive example.
A classic 16th-century Ming lute table stands against the far wall; it would have been an important part of the scholar's accoutrements of the time. Calligraphy is regarded as the highest form of art in China and Wu Bruce has a spectacular collection. Hanging behind the lute table is a 16 th -17 th -century scroll by Zheng Da Qian which depicts the lone scholar in the mountains. The pair of calligraphy couplets are by early 20 th -century calligrapher Lin San Zhi; they refer to furniture. In the foreground, a dash of contemporary style is added with colourful Iranian rugs. The extremely heavy yellow wax ¡®Lashi' stone symbolizes nature being brought inside. 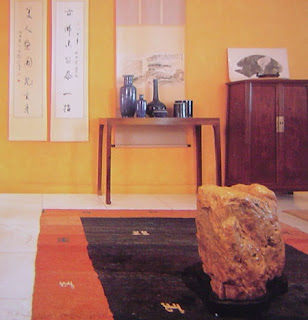 Floor-to-ceiling glass panels overlooking a central stairway help open up the interior of this four-storey London house. In the living room, things are kept architecturally minimal with white walls, a pale wood floor and spot lighting. The clean-lined approach is maintained with select pieces of pared-down antique furniture. A Ming luohan chuang (couch bed)-which would have originally been used for relaxation, meditation or conversation, often moved onto a terrace or into a garden to enjoy nature from-stands against the rear wall; to the left is a carved candlestand. 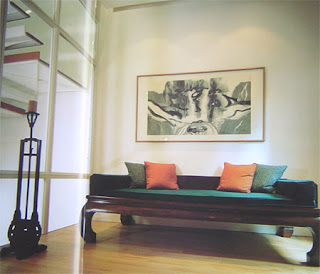 In the library, a 19th-century Anatolian kilim hangs on the wall; to the rear is a 17th-century Huanghuali painting table and a 16th-17th-century southern official's armchair. In the foreground, and Elmwood and red lacquer 19th-century ladder rests against the bookcases. The occupants prize the form of the furniture over the media used to create it as the most important feature in their collection. 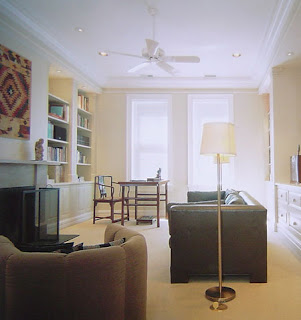 Living with Ming: in a corner of the master bedroom, a Huanghuali Ming table and a southern official's armchair function as a desk area; above the desk hangs a textile from the Kaitag region of Daghestan, dated to the 18th-century or earlier. Neolithic pots, Japanese 19th-century baskets and a modern pot by Jeff Shapiro fill shelving units on either side. The landscape painting on silk is by Fu Shan (1607-1684 ) 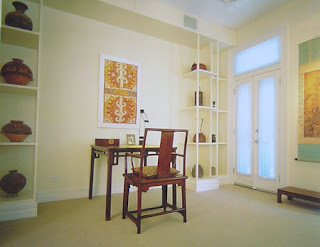 Carol Lu elegantly installed classic, clean-lined Ming furniture within a quasi-industrial palette in her light and airy Hong Kong apartment. In the entranceway, the concrete floor is tactile, durable and childproof. A sliding oak door seals off the space that features a burgundy back wall, a spindleback chair and a huge atmospheric canvas by Paris-based artist Zao Wuki. 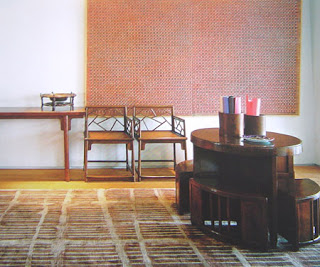 White walls, a striped cream sofa and beige carpeting form the backdrop to a collection of Chinese antiques in the living room. With a nod to practicality, Chang added a glass top to an old wooden trunk engraved with country scenes. Against the wall stands a pair of Qing dynasty wod and brass doors from Shanxi province; near the sliding doors to the dining room is a 1930s cabinet which demonstrates the mix of Western and Chinese elements characteristic of the time. The glass in the bottom section is original. 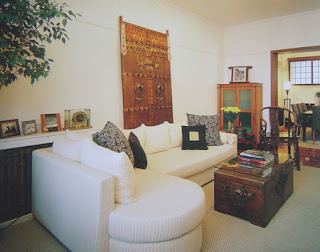 In the living room of Brad Davis and Janis Provisor's apartment, a seepskin throw is draped over a pistachio green sofa; a 1940s chair is covered with leopard-skin print fabric and an Isamu Noguchi lamp stands in the corner. Hanging above the brick fireplaceis a watercolour by Janis Provisor; on the mantelpiece is a collection of Italian glassware from the 1950s alongside antique Chinese jars and vases. On the wall hangs a pair of calligraphy scrolls. 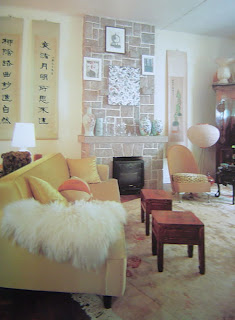 In the living room, a rare 18th-century child's horseshoe backed armchair made entirely of bamboo stands next to a 16 th -centruy Ming Kang table covered in woven bamboo and lacquered in red over black. In the foreground is a low table displaying 18th - and 19th-century Tibetan silver bowls. The Tang horse is a fine example in apple green glaze, with its original unglazed saddle. 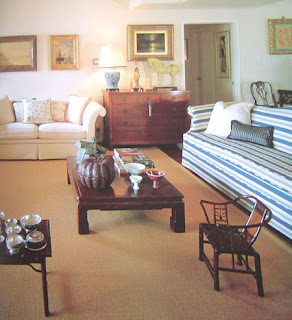